It is nerve-wrecking for me to even think about the agony couples suffer while their marriage falls apart. But it pains us so much more to imagine the suffering their child experiences in the process. Yes, you read it right, we are talking about the painful process of getting divorced from your spouse and the struggle thereafter of getting the custody of your child(ren). The whole journey of separation is ugly but settling the matter of child custody is even uglier. While amicable resolution is a possibility, in reality it is farfetched considering the relations between two adults have already turned bitter due to irreconcilable differences and sometimes inflated egos.

This makes us ponder over the first thought that would possibly come in the minds of divorced parents – who gets the child’s custody after separation? There could be reasons for which each parent would want to win the custody of the child after divorce. Division of parental property, financial support for child’s education, good upbringing, safety and maintenance, visit rights, alimony, comfort with the child, right to take decisions with regard to child’s life, etc. are some that we could imagine. They would hire the best child custody lawyer to win the custody and block it for the other parent. However, as per the Indian child custody law, both parents have equal rights over the child even after their legal separation. The custody of the child who is less than 18 years in age only implies, with which parent the child will physically stay. One parent winning the custody does not mean that the other parent seizes to be the parent of the child and loses all rights over the child. The child custody law clearly states that irrespective of their marriage being annulled, they continue to be the natural guardians of the child. In other words, the custodial parent becomes the primary caretaker and the non-custodial parent retains the right to meet the child.

In most of the cases in India, the custody of the child is granted, by the family court, to one parent and the access of child is granted to both of them. Data clearly shows that out of around 90 cases in a particular year, the custody of the child has been granted to fathers in only 2 cases. What does this signify? Do mothers have an upper hand in the child custody cases in India? No, despite data favouring the mothers, it is not the case. Many-a-times fathers also believe that they can claim the custody once the child attains a particular age. However, this is nothing more than a myth, a disbelief that many continue to live with.

It has been evident in several landmark judgements that the courts have given high importance to the best interest and the ‘right of the child’ compared to the ‘right of a parent’ than anything else while assigning the custody after divorce to a particular parent. However, there may be exceptions or special circumstances that courts consider on case-to-case basis. For example, a) in case a child is less than 5 years old, the custody is usually given to the mother, b) generally father gets the custody of older boys and mother is given the custody of older girls and c) courts also consider the choice of the child who is above the age of 9 years.

It brings us to a point where it becomes imperative to throw light on the types of child custody allowed by Indian law. It can be one of the following kinds:

It is already a nightmare for parents who are beleaguered with separation. Adding to woes, is the complications of getting the custody of their biological child(ren). It is a battle that none would want to lose. Imagine yourself in this situation where you are looking for information on how decisions are taken and judgements granted with respect to child custody after divorce. The best way is to contact a child custody lawyer who not only can guide you in the process but sail you through with bare minimum stress.

17(3), the preferences and inclinations of the child are of vital importance for determining the issue of custody of the minor child. Section 17(5) further provides that the court shall not appoint or declare any person to be a guardian against his will". 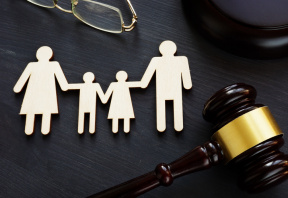 Summary of the Case:

The Wife (Neha) filed an interim application u/s 125 CrPC claiming maintenance for herself and their son by her husband (Rajnesh). Family Court granted her a favourable Order of Rs.15,0000/- p.m. and Rs.5,000/-p.m. to their child to be paid by the Husband (Rajnesh). This Order was challenged by the Husband by way of a Criminal Writ Petition in Bombay High Court (Nagpur Bench) wherein the Court affirmed the Order of the Family Court and dismissed the Criminal Writ Petition. Husband lastly appealed to the Supreme Court. The Hon’ble Court awarded additional costs and relevant Order in maintenance of the Wife and their son by the Husband and also provided detailed guidelines on the fourth issue amongst the five (5) problems mentioned in the judgment that is issue of date from which maintenance to be awarded.

In this Judgement Hon’ble Supreme Court observed and analysed all the precedents and regulatory frameworks used to decide a date from which maintenance can be awarded.

What should be the date from which Maintenance to be Awarded?

a) Date on which the application for maintenance was filed;

b) Date of the order granting maintenance;

c) Date on which the summons was served upon the respondent.

Hon’ble court observed various precedent & judgements from different family courts and reached to the conclusion that family matters take a lot of time for their disposal and this delay is not in favour of justice and against the human rights & basic dignity of the individual.

Hon’ble court also provided the rationale for the above direction that it will enable the wife to survive  the financial tough time because if a dependent spouse loses its financial strength then it became very challenging to represent themselves before the court.

To bring uniformity and consistency in the orders passed by all the Courts Hon’ble Supreme Court’s direction is very clear that the date on which  the maintenance application is filed will be considered as the date from which Maintenance can be awarded.  Hon’ble court also observed that the right to claim maintenance must date back to the date of filing the application, since the period during which the maintenance proceedings remained pending is not within the control of the applicant.